The 7 Best Toys to Terrify a Child with This Christmas

The 7 Best Toys to Terrify a Child with This Christmas

We all remember favorite toys from our childhood; a babydoll, a cuddly stuffed animal, or maybe a light bright or easy bake oven. Toys are supposed to be fun and cute and not violent, right? Well, toy manufacturers haven’t always agreed on that point, and some truly terrifying toys have been marketed to children. If you are looking for the perfect white elephant gift, some of these ghastly toys are probably available on eBay. Here are the 7 best toys to terrify a child (or adult) with this Christmas:

Because what says childhood fun like an instrument of execution? During the French Revolution, Mini Guillotines were a popular ‘toy’ for kids. Little boys and girls would chop the heads off of dolls or, more disturbingly, mice and birds. I guess this is a reminder to be careful about the example we set for children.

Some people objected to the toy at the time. The famous writer Wolgang Von Goethe’s mother wasn’t at all happy when she was asked to purchase the toy for a grandchild. She thought the creators of the thing should have been “put in the pillory”.

Even more strange is the fact that this toy was brought back in the 1970s. It would have been disturbing enough as a relic of the French Revolution. But the 70’s? Hey, let’s go see Star Wars and then play with our toy guillotine. Thankfully, parents protested the toy, and it wasn’t back on the market for long. 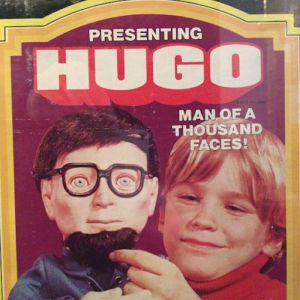 Hugo Man of A Thousand Faces

Created in 1975 by the Kenner company, Hugo was the male version of that big Barbie head that all the girls had in the ’90s, you know, the one where you could do her hair all different ways. Hugo only existed from the waist up and had stuffed arms and a bald rubber head. His arms would move when you pulled a string, so maybe the creators imagined him being used for puppetry or something?

Hugo came with disguises that could be stuck on with a special glue, but even without an eyepatch, Hugo was creepy. Maybe it’s because he didn’t have any eyebrows. The doll fell out of popularity before the 80’s probably because kids didn’t like having him sitting in their rooms staring at them. 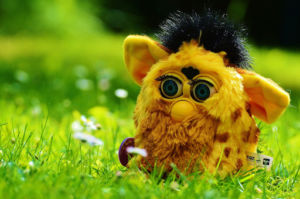 This fluffy owl-like toy was one of the first ‘high-tech’ type children’s toys, and it caused a real kerfuffle when it was released in the US in 1998 (think Black Friday tramplings). Hailing from Japan, the toy featured a computer system that was supposed to be able to learn new words. It also spoke in its own language.

If you grew up in the ’90s, you probably have your own story of ‘possessed’ furbies that kept talking when their batteries were removed or said creepy things in the middle of the night. This toy was expensive at the time, but some kids ended up violently destroying their furbies after they’d been creeped out one too many times.

Disturbingly, the Furby is back on the market. The modern version is supposed to have better software, but we all know they just uploaded a smarter demon into it. 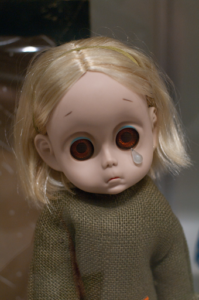 This doll was released by Hasbro in 1965 and was only on the market for one year, for obvious reasons. What was it about the ’60s and ’70s? Were they trying to traumatize children? Little Miss No-Name came dressed in a burlap sack and had a tear running down her cheek. The box the doll came in actually said “the doll with a tear”, like that was a good thing.

Little girls were supposed to feel sorry for the doll and want to take it home and love it, but most of them were smart enough to be deeply terrified. Let’s be honest, Little Miss No-Name looks like she’s only pretending to need help so you’ll come close enough for her to eat your face. 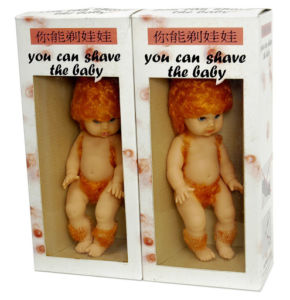 Another doll invented by people who have never once talked to a child. I mean, what kid thinks, “You know what I’d really like to do, shave a doll!” This doll doesn’t even teach kids about puberty, because the body hair isn’t in normal places. Look at its calves! What is going on there? Well, there is one normal place, but letting a child shave a doll’s crotch is just not ok. Thank you, Japan, once again for disturbing us in ways we didn’t even know were possible. 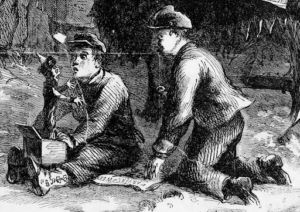 A German clockmaker originally invented this toy in the 16th century. For some reason, no one since then has seen fit to put a stop to it. The creepiest Jack -in -the -Box’s were made in the 1800s, but modern ones are pretty creepy too. You can actually watch youtube videos of babies ‘reactions’ to jack popping out of the box like a hungry demon.

In French, a Jack-in-the-box is called a devil-in-the-box. The concept of the toy was supposedly based on a story about a man who trapped the devil in a boot to save the village of North Marston in Buckinghamshire, England. What better toy for your little one than the Devil himself popping out of a box? 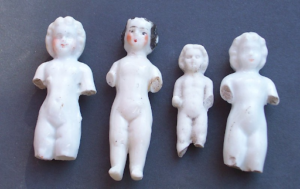 These armless porcelain dolls were first sold in Germany in the 1850s as a toy for kids during bathtime. It didn’t take long before this harmless toy became associated with a popular poem of the time, “Young Charlotte” by Seba Smith. The poem tells the story of a young woman who freezes to death while riding in a sleigh with her sweetheart on New Year’s Eve (Umm, I suspect foul play).

The little, stiff, white, dolls were seen as resembling the unfortunate Charlotte from the poem, so of course, they began selling the dolls with their own coffins and blankets. In Britain, people started baking the dolls into cakes and puddings as a surprise for kids at Christmastime. As you do, obviously.

Something from Stranger Things Has Made its Home at Castle of Chaos. Curious? Come Visit Us Today.