When people ask what my favorite season is, I’m never sure whether to say spring or fall. Spring is wonderful because winter is over, but fall is great because the sweltering heat of summer is finally ending. Both seasons are ideal times to get outside and appreciate the beauty of nature. The thing that gives fall an edge over spring is that it’s the time of my favorite holiday, Halloween. If you enjoy being creeped out, springtime isn’t the best season. Or so I thought. It turns out that there are actually a whole bunch of places where you can go to enjoy nature and get your scream on in the springtime. Here are the five best places to get creeped out while enjoying the views. 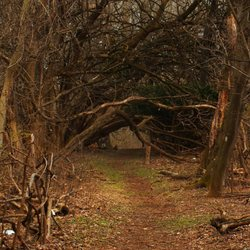 Leakin Park is a lovely place to take a walk on a spring day; it’s also a lovely place to hide a body… or three. The densely wooded park is sometimes referred to as an unregistered cemetery because of the number of bodies that have been discovered there, over 71 since the 1940s. Police who are looking for specific victims in the park are instructed to only look for a body that matches the description of the person they are looking for and not get sidetracked with all the other human remains. Most of the victims found in the park have been murdered elsewhere and even though it sits between two high crime neighborhoods, most of the dead were not killed in gang-related crimes. The bodies of infants, children, and men and women of all walks of life have been found in the park.

Recently, the city of Baltimore has improved bike trails and closed off more secluded areas of the park to make it less appealing to body dumpers. Leakin Park is very scenic and features a stream and a beautifully creepy Victorian mansion that visitors can tour. If you are in the Baltimore area the park is a nice place to spend a spring day, just try not to think about the bodies that haven’t been discovered yet or the restless spirits that may be lingering there. 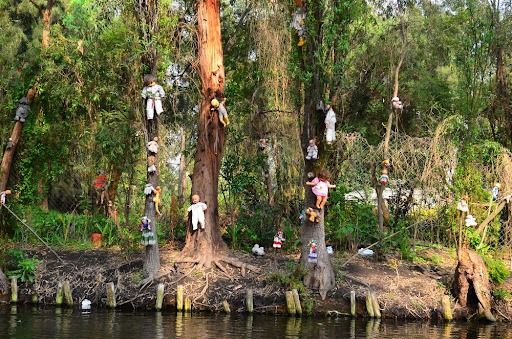 The Isla de las Muñecas is a small island just south of Mexico City situated between the canals of Xochimilco. The island is a scenic floating garden, and its caretaker was Don Julian Santana Barrera. One day Julian found a girl who had drown on the island and was distressed that he couldn’t save her. He found her doll nearby and hung it on a tree as a memorial to her. After this incident, Julian came to believe that the spirit of the girl was haunting him. He spent the next fifty years hanging dolls all around the island in an attempt to appease her. In 2001 Julian was found drowned in the same place he had found the dead girl.

The island has since become a bizarre tourist destination. Dolls and doll parts hang from nearly every branch, glassy eyes watching visitors. Some say that the spirit of the drowned girl possesses the dolls and that the spirit of Julian has now joined her. Locals describe the island as being “charmed” not haunted. Visitors have reported hearing whispers from the dolls or seeing their eyes move. Some locals treat the island as a shrine and change the clothes of the dolls to show respect. 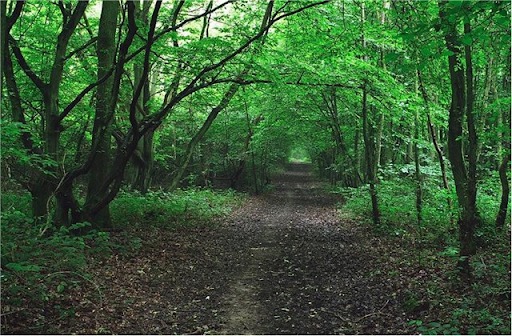 The website for the Dering Woods describes it as a “nature-lovers dream” home to nightingales, wildflowers, and butterflies. There is no doubt that the woods are a beautiful place to spend a spring day in Kent, but you might want to think twice before going there at night. The Dering Woods has also been described as the most haunted woods in England. It is nicknamed the Screaming Woods because of the blood-curdling screams that have been heard issuing from the depths of the forest at night.

Locals think that the woods are haunted by the spirits of those who have become lost while traveling and also by the ghost of a highwayman who was killed and pinned to a tree by locals in the 1800’s. Locals and visitors have reported hearing footsteps, voices and screams both day and night. The woods are home to one of the oldest Neolithic sites in the world, and some think that the ancient energies of that place have contributed to the haunting. Ghost hunters claim that twelve harmless spirits have been identified haunting the woods. Harmless they may be, but the sound of the screaming woods is enough to make many wary. 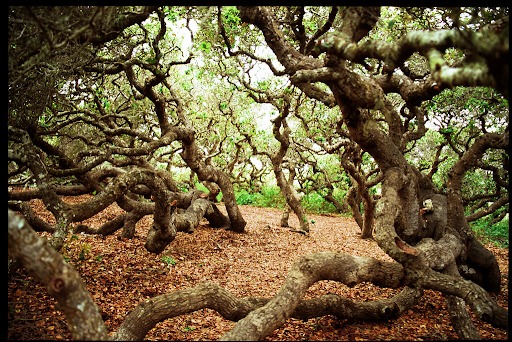 Elfin Forest in San Diego County is a beautiful place to enjoy nature before the heat of the summer sets in. It’s also a great place to go for a supernatural thrill. Elfin forest has everything that a great haunted location should have: twisted, creepy trees, an abandoned insane asylum and a history that includes a religious cult, a gypsy camp and possibly a Native American burial ground.

Legend has it that gypsies lived here around the turn of the 19th century. When settlers drove them off, they put a curse on the woods. Some say that one of them stayed, a witch who haunts the woods to this day. The Witch of Elfin Forest is said to ride a stallion that gallops silently and to have green, glowing eyes that instantly kill anyone who looks in them. It is said that she has chased drivers off the road to their deaths and that she will mark anyone who enters the forest so that they die if they ever return. Other stories about Elfin Forest include tales of bleeding trees and the spirit of a white-clad woman who follows hikers. 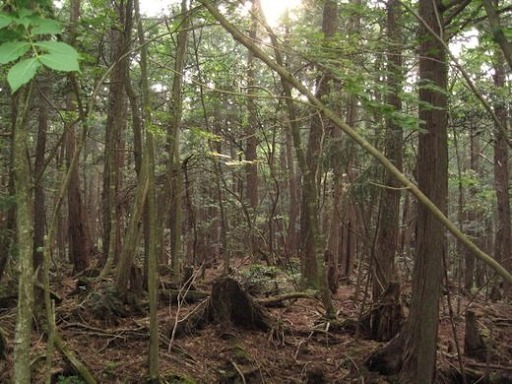 This is one of the most well known haunted forests thanks to horror films that have recently brought it to the attention of westerners. This thickly wooded area at the base of Mt. Fuji is a beautiful natural place with a sad and creepy history; it is nicknamed Suicide Forest because so many people come here to take their lives. Even before it became associated with suicides, the forest was known in Japanese folklore to be inhabited by demons. Some say this is why people who go in the forest are driven to kill themselves, and locals have long claimed that the forest projects an air of sadness that magnifies the depression of those who enter it. Others say that some of the deaths in the forest have happened because people got hopelessly lost in the tangled trees. The forest is notoriously easy to get lost in, so visitors often tie a string to trees to help them find their way. As a result, some parts of the forest are covered in spiderwebs of string and yarn.

The woods are littered with man-made objects. Some are the personal items that suicide victims left behind, everything from whole campsites to clothes, and others are things that have been left as memorials to loved ones who never left the forest. One part of the woods features dolls hanging from trees as a memorial to the dead. Visitors have even reported finding skeletal remains hidden in the trees. Obviously, this all adds up to give the forest an extremely unsettling vibe. Despite these tragic and macabre facts, the forest is a beautiful place to view Mt. Fuji and enjoy the Japanese countryside. If you choose to visit, make sure to respect the forest and the dead who rest there.

Looking For A Haunted Experience Without The Hike?