The Halloween pre-season is officially here! It’s time to break out the scary movies and generally get your creep on. If you want to scare yourself and enjoy the beautiful fall weather, we suggest taking yourself on a ghost tour of the Salt Lake area. Here are some haunted sites to start your fall out right: 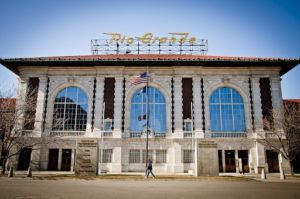 You’ve probably noticed that we have some pretty cool historic buildings in downtown Salt Lake. Of course, you can’t have ornate 19th-century architecture without some hauntings. There are several reportedly haunted buildings downtown; we suggest you begin with the Rio Grande Train Depot (300 S Rio Grande Street).

The building was initially constructed by the Rio Grande Western Railroad in 1910 and operated as a train depot until 1947. The most frequently seen spirit is known as “The Purple Lady”. The story goes that she argued with her fiance at the depot right before he left for one of the World Wars. She threw her ring onto the train track, but immediately regretted her action. When she went to retrieve it, she was struck by a train and killed.

The building now houses the Utah Historical Society, and members have reported strange happenings in the building. Several employees have had encounters with The Purple Lady, who wears a purple dress and has long black hair. If you want to have your own encounter, you can pay them a visit between 8 am and 5 pm on weekdays. 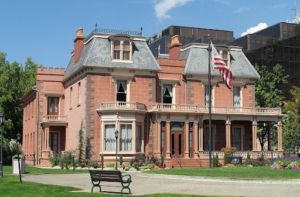 The Devereaux Mansion located at 340 W South Temple is within easy walking distance of the train depot. You have to register in advance to take a tour, but you can walk by and admire the gorgeous architecture anytime. The house was built in 1857 and has been owned by several founding Utah families including Brigham Young’s eldest son. It is now used as a venue for weddings and other events.

Staff have reported having encounters with two different spirits. The ghost of a little girl enjoys playing tricks on the staff and has been seen waving to people at night. The other ghost is a grown woman, thought to be either a former lady of the house or head housekeeper. She is described as being more aggressive and seems to want to defend the house from people who may misuse it. 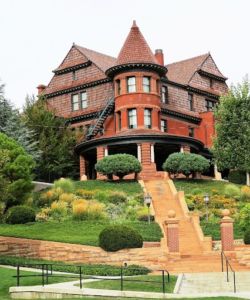 The McCune Mansion at 200 N Main St. is another beautiful historic home with residents who have never left. Again, you have to sign up in advance for a tour, but it is well worth it to see what $1 million could buy in 1901. While you are there, you might see the spirit of the little girl whose portrait hangs in the house, or the specter of a black-cloaked man. Visitors and staff have reported cold spots, doors that open and close on their own, and even footprints that begin and end in the middle of a room. 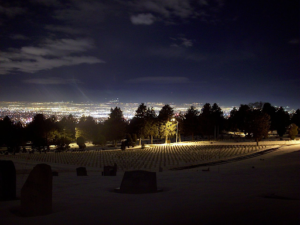 The Salt Lake Cemetery is known as the most haunted cemetery in Utah. Over 125,000 people are buried there, and many graves date back to the 1840’s right after the pioneers arrived. People who walk and jog around the area have reported all kinds of strange experiences. Some say they feel like someone is behind them, but when they turn around, no one is there.

Children can be seen running and playing in the cemetery but will disappear when approached. The ghost of an old man likes to take walks on the pathways, and spirits of young men in military uniforms have been seen wandering the grounds. If you visit, be sure to take pictures and inspect them later for signs of ghostly activity. Many people have reported seeing unexplained images in photos. If you are there in the evening, you might see orbs floating among the headstones. 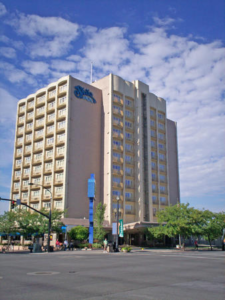 The Shilo Inn on 206 S. West Temple was the scene of a tragic murder-suicide in 1978. Immanuel Davis committed suicide while being investigated by the FBI. He left instructions for his wife, Rachel Davis, to kill herself and their children after his death. Three days after her husband’s suicide, Mrs. Davis was staying in a room on the 11th or 12th floor of what is now the Shilo Inn. She threw her children off the balcony of her hotel room and then jumped to her death.

Today the whole block around the hotel is said to be haunted by the murdered children. Rachel Davis herself has been seen in the hotel, and children’s voices have been heard in the downstairs game room and around the pool. People walking in the area around the hotel have reported hearing a child’s voice saying, “Mom, don’t make me do it.” 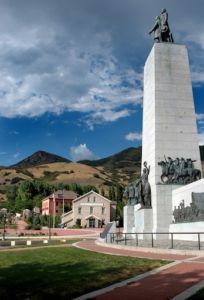 This is the Place Heritage Park (2601 Sunnyside Avenue, Salt Lake City) is located in the Foothill area near downtown Salt Lake. The park is an interactive replica of pioneer life and home to some historic buildings. The most famous (and most haunted) of these is Brigham Young’s Farmhouse. The house was originally built in 1863 as a gathering place for locals and visiting dignitaries. It was relocated to This is the Place in 1975. Brigham Young never actually lived in the house, but his spirit has been seen lingering around it. Several apparitions, besides Young, have appeared to guests and staff, including a young man and several children.

The whole park is said to be haunted, including the blacksmith’s shop, where ghosts like to move things around. Volunteer blacksmiths have reported that when they open the shop in the morning, objects have been moved in front of the door from the inside. Cold spots and other odd occurrences have also been reported. 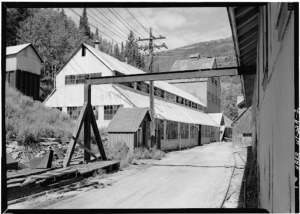 Just a scenic 20-minute drive from Salt Lake, Park City is home to some serious hauntings. The Park City Silvermines have long been closed, but the ghosts of those killed in mining accidents can still be seen throughout the older parts of the city. Park City was established as a mining town and has had its share of tragic accidents, including a fire that destroyed most of the town in 1898. In 1902 a mine explosion claimed the lives of thirty-five miners.

After the explosion, there were reports of ghosts with missing limbs. Later miners reported malicious spirits that would knock on their ladders in the mineshafts. Today residents still report encounters with the spirits of the miners, prostitutes, and vagabonds that inhabited Park City during its wild west days.

Looking  For  The Most Haunted Place of All? Castle of Chaos Used To Be A Haunted Nightclub.

Haunted House Tickets Start at $22.50 For The Month of October – Use The Code: CHAOS10