Mother’s Day With The Evil Queen

Mother’s Day with the Evil Queen

In a couple of days, you will probably be visiting your mom to celebrate Mother’s Day. Most moms and stepmoms are awesome, they take care of us, put up with us and act as our greatest advocates, but there are a few notable exceptions. Fairy tales are full of stories about evil mothers and stepmothers. Join us as we take a look at four wicked moms, including one historical Evil Queen who may have been the inspiration for them all.

The most memorable part of the story of Hansel and Gretel is the cruel treatment the children receive at the hands of an evil witch after becoming lost in the woods. How the children came to be lost in the woods often gets overlooked. In the Grimms version of the tale the woodcutter’s family has fallen upon hard times and is running out of food. The mother’s solution? Send the kids away. She tells their father that the only way for them to survive is to take the children deep into the woods and abandon them there. He is reluctant, but she ultimately badgers him into it, and he lures his son and daughter into the woods.

Luckily, Hansel and Gretel both have much better problem-solving skills than their parents and end up coming home after their adventures with their pockets stuffed full of gold and jewels. They find that their evil mother has died and their father is repentant, so all’s well that ends well I guess. Still though, abandoning children is not an acceptable cost-cutting strategy.

This Grimms story has connections to both Snow White and the real-life story of Fredegund (we’ll get to her later). The story begins with a couple who want children but can’t have them. One winter day the wife goes out to the juniper tree and begins to peel an apple. Her knife slips and she cuts her finger. When she sees her blood on the snow, she exclaims that she would love to have a child as white as snow and as red as blood. Nine months later she gets her wish and gives birth to a baby boy, but dies in the process.

The father remarries and has a daughter with his new wife. The wife is jealous of her husband’s son and takes every opportunity to abuse him. The story states explicitly that she wanted to get all of her husband’s money for her daughter. One day she tells her stepson to get an apple out of the chest where they are kept. When he bends over to grab an apple she shuts the heavy lid so hard that he is beheaded.

As if that’s not terrible enough, she then comes up with a plan to hide her own guilt by making her daughter, Marjory, think that she is responsible for the boy’s death. She ties the boy’s head back on with a sheet and seats him at the table with an apple in his hand. When Marjory comes in and asks the boy for an apple, she is puzzled that he does not reply and asks her mother what to do. The evil mother tells Marjory to box his ear. As Marjory does this the boy’s head flies off, and the poor girl is understandably horrified, thinking that she has killed her brother. But now the mother has a body to get rid of, so what does she do? That’s right; she makes him into dinner and feeds him to his unknowing father.

This story does have a happy ending thanks to some intervention from a magic bird who exposes the mother’s sins before dropping a millstone on her head and somehow bringing the boy back to life. Still, this woman goes above and beyond in the evil mother department.

The Disney version of this story is familiar to most, but the Grimms version goes into even more detail about the evil stepmother’s plots. The wicked stepmother in this story is a queen and is motivated not by money, but by envy. Snow White is another child who fits the apparently popular red as blood and white as snow aesthetic, and the Evil Queen’s magic mirror insists that she is the fairest in the land.

Determined to take out her competition the Evil Queen tries to kill Snow White repeatedly and nearly succeeds more than once. Not only does she send her huntsman out with orders to murder the seven-year-old Snow White and bring her heart back in a box– so she can eat it, she also visits her when she’s with the dwarves.

The first time she visits she is disguised as an old beggar woman selling corset laces. When Snow White buys one and allows the old woman to lace her up the Evil Queen laces her so tight that she can’t breathe and falls down unconscious. Luckily the three minutes without air rule doesn’t apply in fairy tales, and the dwarves are able to revive her when they get home.

When the Evil Queen realizes that her second attempt has failed she goes back for a third. This time she’s an old woman selling combs- poisoned combs. Snow White once again loses consciousness but is later revived by the dwarves. Thinking that the fourth time might be the charm, the Queen tries again, this time with a poison apple. Even the Dwarves can’t bring her back this time, but a creepy prince who wants to take the pretty dead girl home accidentally revives her by dropping her coffin and dislodging the apple from her throat. The Evil Queen is thwarted again and in one of the more creative punishments from Grimms is made to dance herself to death in red-hot iron shoes. 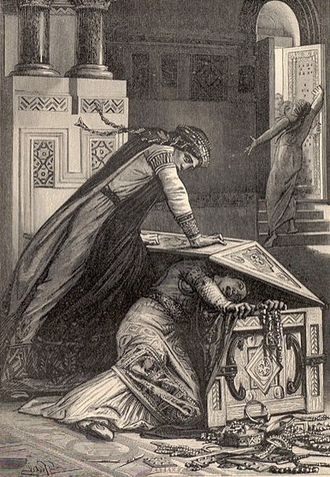 Fredegund, Queen of the Franks

Here’s a real-life story that really needs to be made into a TV show. Fredegund lived in what is now France from 547 to 597 CE. Scholars have suggested that she may have been the inspiration for the many evil mother and step mother stories found in medieval fairy tales.

Fredegund was a low born concubine of Chilperic I, King of the Franks. Chilperic was married at the time, but Fredegund wasn’t content with being a concubine. She convinced Chilperic to force his wife and daughter into a convent, thus nullifying his marriage. To Fredegund’s dismay, Chilperic then married a Visigothic princess named Galswintha. This time Fredegund convinced Chilperic to strangle his wife and marry her. Within a relatively short amount of time, Fredegund went from being a concubine to being Queen of the Franks. Galswintha’s sister Brunhilda was married to Sigibert King of Austrasia, Chilperic’s brother. Brunhilda was a badass in her own right, and she knew that Fredegund was behind her sister’s death. This family drama led to outright war between Sigibert and Chilperic, with their wives egging them on.

Fredegund dedicated her entire life to gaining power for her son Lothair by annihilating his rivals. She managed to dispose of all her stepchildren and her brother-in-law Sigibert. She also made attempts on the lives of Brunhilda, Brunhilda’s son, and her other brother-in-law Guntam, King of Burgandy. She may also have been responsible for the death of her husband. Immediately after being widowed she ran off to Paris with all the Kings money and ruled through her son Lothair.

But perhaps her most infamous deed was her attempted murder of her own daughter Rigunth. There are different accounts of why Fredegund tried to kill Rigunth; some say that Rigunth was constantly complaining that she should be mistress of the household instead of her mother. The story goes that Fredegund invited Rigunth into the treasury to view the king’s jewels, when Rigunth leaned into the chest to take something out Fredegund slammed the lid down, but was stopped by servants before she could kill Rigunth. Unlike in the fairytales, no terrible fate awaited this murderess; she died of natural causes at the age of 50 – a pretty long life at the time. Her son even went on to capture his mother’s life long rival Brunhilda and have her drawn and quartered so that even after her death Fredegund got what she wanted.

For A Special Treat For Mom,