The Art of Fear – An Interview With James Bernard

“Who doesn’t like adrenaline?” asks the owner of Castle of Chaos Haunted House, “Everyone does; it makes you feel good. Your whole body feels good – when you work out, when you get scared, and when you jump out of an airplane.” Thankfully, haunted houses are much safer than throwing yourself out of a metal tube with all your faith tied into a strip of fabric. That’s why every year, flocks of people swarm haunted houses and beg to be scared.

And there’s no one better to tell you about the art of scaring than the founder and owner of Castle of Chaos, James Bernard, who has had Castle of Chaos open since 2001.

James gets his background for Castle of Chaos in all things acting – he expressed a love for anything theater, “from watching Phantom of the Opera or Les Miserables, to improv, to LARPing – Live Action Role Playing; just anything to do with acting is wonderful,” enthuses James. This is a man who breathes the theatre world.

Curious about the origins of Castle of Chaos, I asked for a history rundown on it and found that Castle actually started a long ways from the haunt world: In 2001, James was a busy man. He was finishing a senior project in business, becoming an officer in the military, and running two side businesses too. Instead of using one of his other side businesses for his senior project and phoning in for his A, he decided to stack more onto his plate and the brainchild, “Castle of Chaos” was born. 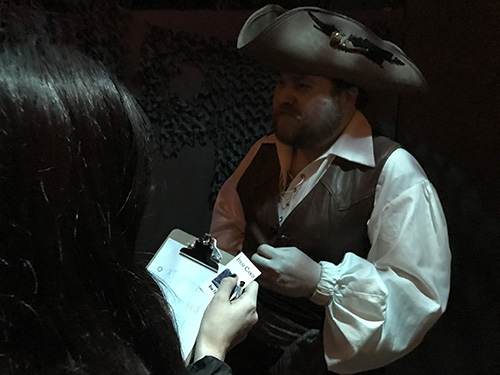 The initial Castle of Chaos opened as a mystery theater. Their goal was to provide a different entertainment that you could visit during the month of October. A mystery theater is an interactive show that you can walk through; you can interact with characters, go back and forth between rooms to solve puzzles, and you can interact with characters to solve the grand overall storyline. So in a sentence – it’s a very different experience than a haunted house walk through.

During the first two years of business, James and his actors at Castle would mock haunted houses; they were proud that they offered a vastly unique show, but as time went on, their customer feedback sang a single tune, “scare us.” So the scares rolled in, and by the fourth year, there was no denying. “We’re a haunted house, we give up,” laughed James, “and we all loved scaring anyways, so it was a natural transition.”

But thankfully, Castle of Chaos didn’t turn into your regular ol’ spook alley. As their origin was not your standard haunted house story, neither is their haunt. One thing that differentiates Castle from most other haunted houses is the extreme interaction; “we put customers through more slowly than other haunted houses…so we can have a more personal experience,” explains James, “but our actors really, really make the difference.”

Castle of Chaos has been known throughout the haunt community as the haunt that focuses on its actors. As the actors are the lifeblood of the show, crucial skills are passed on from owner to actor coach, to actor. 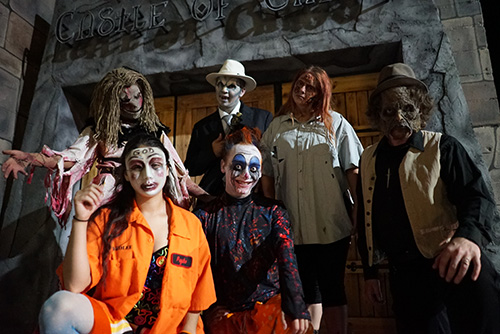 One of the skills imparted is the knowledge of whether someone is actually afraid. James explains, “It’s the same skill that separates as good poker player from a bad: whether or not you can accurately read someone. I’ve done this long enough, and I train our actors to recognize this.”

He explained that while acting classes provided to their cast teach them base skills, the real knowledge comes from time on the job. Acting classes focus on how to attack certain groups of people and how to make it fun. James mentions, “We scare you better than anyone else, but we make it fun and entertaining. We make it different so it’s not your standard scare, it goes beyond your standard jumpscare – although anything that does make you jump or tremble is great too.” 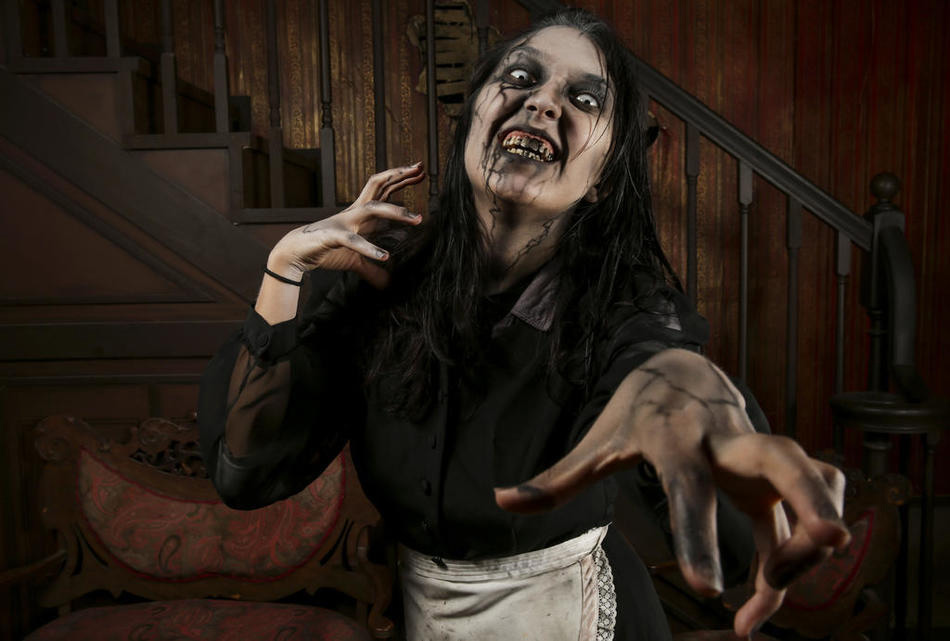 Every haunt in Utah has its strengths. Castle of Chaos really focuses on honing its actors through the use of classes and experience from the 20,000 customers that they see come through. Training an actor to safely use hands-on, and how to pull a customer from the outside world into a whole new reality is Castle’s strength and focus.

Although the actors at Castle are among the best you’ll find in the valley, there’s no role or monster that people are specifically afraid of. The biggest fear factor that Castle employs is the fear of the unknown.

There’s a certain fear when you can hear something, but not see anything, that really gets people’s hearts racing and fear accelerating. Picture a room full of fog, and a laser cuts the room right down the middle. You can’t see anything below the laser, but you can hear…something. You don’t know if it’s a 14-year-old girl, a 30-year-old man, or a crocodile. You don’t know when it’s going to strike, or from where, but you know it will, and that anticipation lets your imagination run wild and get your heart pumping.

As James explains, “Think about that Jack-In-The-Box. It works perfectly. We wind it up and we’re waiting; we’re anticipating the scare, but the pop gets us every time. Many people think the best time to scare someone is when they’re not expecting it, but I disagree. It’s best to scare them when they’re expecting it- catch them with their hand in the cookie jar, if you will.”

He goes on to explain that there’s a flow throughout the entire show designed to build the tension for the best scares. It doesn’t just run through an entire 30 minutes of constant in your face scare, but it allows the tension to build for the most heart-stopping scares.

It starts with a set that makes you feel like you’re in a certain place or that you don’t know where you are – either one – your mind starts to wander. It can put you in a specific location or movie and tell you what you expect to see – whether that’s Pennywise, Jason, or Freddy. And then suddenly, you’re not thinking about work, the kids’ grades, the house payment, but you’re thinking much quicker and about the large man approaching you. Inside a haunted house, the reality isn’t what you know and expect.

Castle uses an assault on all five senses to create the suspension of disbelief. James explains, “This industry is so big, you can basically find anything. There are now multiple companies that do little canisters. If I want you to feel like you’re in a swamp, I’ll play a soundtrack of a swamp, a set that you’re in a swamp; I’ll have running, dripping water that you can see and hear, and then I’ll get a scent cannon that is swamp smell.” Sure, logic can tell you that it’s not real, but when all five senses tell your brain otherwise, and when the creature from the black lagoon comes rushing at you, who do you think your brain will believe – your senses or some weak logic?

And maybe a swamp is too far-fetched for your brain to believe. You’ll ask yourself about the logistics of marshland in northern Utah – the bayou would be hard to find in the Wasatch Mountains. But take this instead; you know you’re inside, you see a dim glow ahead through some steam, and hear an ominous hissing. Then, a real-life scary smell assaults your nose – gasoline. If you were at home, you’d rush around checking for leaks, but you’re not home, and you can’t actually see much of anything at all. Then comes the spark out of the darkness; considering that this is a very much real-life scenario, it’s hard to persuade your brain that it’s fictional in the heat of the moment. 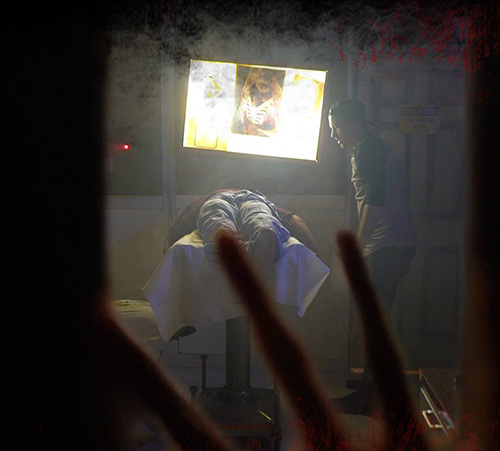 One of the things that sets Castle of Chaos apart is their attention to the details. Very few haunted houses will take the time and effort to put it all together, and then the actor really bring the scenery to the next level of reality.

As for what’s next for Castle of Chaos and its quest to further merge fear into reality, James keeps his lips sealed shut. He confesses that there are a few renovation plans on the table that include the newly opened outdoor courtyard, but it seems that until things are set in stone, the Castle’s keeping its secrets. However, the newest renovation for Castle of Chaos was launched just this year. 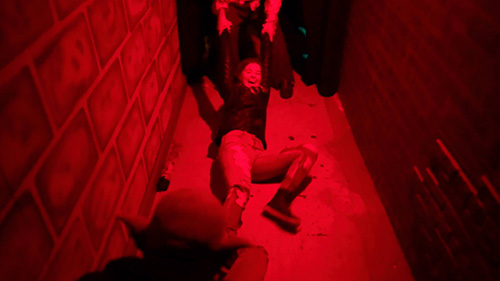 Now Castle of Chaos has always been unique in its aspect of allowing you to customize your haunt experience. Before 2018, you could choose from four levels of fear – starting from a wand that repelled monsters, to a level where you could be picked up and carted away from your friends.

So I asked James about Level 5 – whose slogan is, “Will You Survive?” – pretty gruesome, right? He initially laughed and would only say, “You should do it!” But after some pressure, he explained that it’s a targeted Level 4 experience, with a different mark that tells the actors that you expect more when you walk through the haunted house. Then there’s Level 5 only rooms that provide most intense haunted house experience in Utah – guaranteed.

Imagine having the attention of a dozen trained actors – the best of the best – focused on one thing – scaring you. Everyone has something that scares them, and Castle of Chaos combines their years of experience with specially trained professionals brought in from the outside to really push that envelope of fear. Don’t believe that it’s intense? Of the first eight official customers – seven had to quit the experience – so the question becomes, can you survive Level Five?

For Your Local Horror Adventure…