What is Dia de los Muertos?

What is Dia de los Muertos?

Ruffled dresses, intricately painted faces, and skulls on candy, baked goods, and decorations – it’s time to celebrate Dia de los Muertos, the Day of the Dead. Often confused with Halloween in the United States, the Day of the Dead is actually a colorful celebration of the lives of loved ones who have passed. 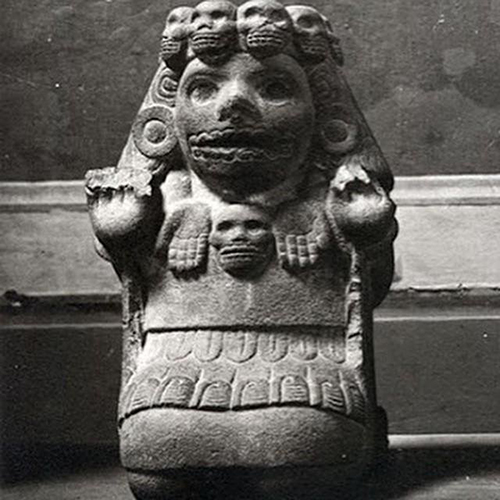 Dia de los Muertos dates back 3,000 years to an ancient Aztec tradition that commemorated the lives of lost loved ones and paid homage to the goddess Mictecacihuatl, also known as the Lady of the Dead. Originally the Aztecs held this celebration in the summer, but after Catholicism spread through Mexico, the holiday was moved to coincide with the Christian holiday of All Souls Day on November 2. Dia de los Muertos was mainly celebrated in Southern Mexico, where Aztec culture was prominent, until the 1960s when the Mexican government introduced the idea into the school system as a form of cultural unification.

Now November 2 is a national holiday in Mexico and some other Latin American countries. In most places, the party lasts at least three days, from October 31 to November 2, and in some regions, there are celebrations for a week leading up to the official national holiday. 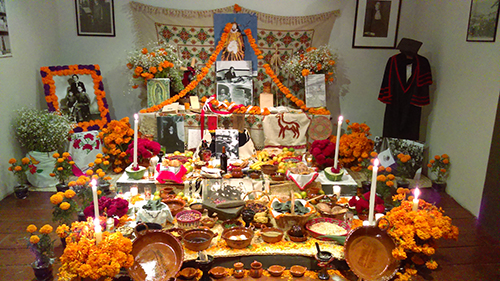 So how do people celebrate this holiday? As with most great celebrations, Dia de los Muertos is about food, family, and fun. An altar dedicated to departed family members is the center of the celebration in most homes. Families leave Ofrendas (offerings) on the altar to attract and honor the spirits of their loved ones. Sometimes the altar itself is referred to as an Ofrenda.

A traditional Ofrenda includes pictures of the family members being honored and decorations and offerings that symbolize the four elements. Bread is often left to symbolize earth, candles for fire, and a fluttering paper banner for wind. Water is offered in case the spirits get thirsty. Family members leave the favorite foods of their loved ones on the Ofrenda and their graves, along with marigold flowers and fragrant copal incense. 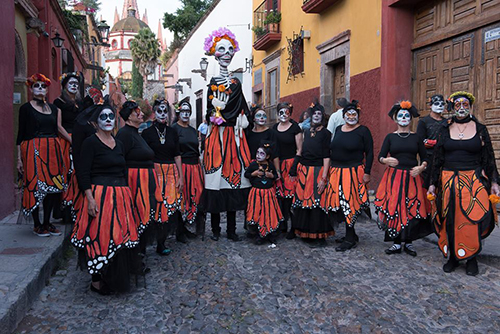 The key symbols of the Day of the Dead -Skulls, Aztec marigolds, and monarch butterflies- are often depicted on both Ofrendas and gravesites. Skulls (and bones) represent the dead themselves. The skulls seen on Day of the Dead decor are not frightening, they often take the form of beautifully decorated sugar skulls, a traditional Day of the Dead treat. Skeletons are also seen everywhere near the holiday and are usually depicted in playful poses and wearing colorful clothing. Marigolds have been associated with rituals honoring the dead since Aztec times. Many believe that the strong smell attracts the spirits of the ancestors and helps them find their living relatives. Monarch butterflies arrive in Mexico around harvest time every year, fleeing the onset of cold weather in North America. The timing of this migration has led to the belief that the monarchs are the souls of the dead returning to visit loved ones on Dia de los Muertos. It is common for people to dress in costume as monarch butterflies during parades. 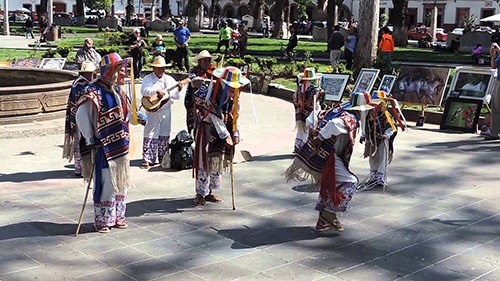 The days leading up to the national holiday on November 2 in Mexico are usually spent partying. Many cities and towns hold parades, and music and dancing are everywhere. One popular dance is La Danza de los Viejitos– the Dance of the Little Old Men. Men and boys dress like old men, hunch themselves over and shuffle around before breaking into a fast-paced dance. It’s a reminder that this holiday is a celebration of life, not a somber reflection on death.

Anywhere festivities are taking place you will find traditional foods associated with the holiday. Pan de Muerto, or Bread of the Dead, is one of the most popular foods. The recipes for this bread are as varied as the families that make it, but it is usually sweet and often decorated with skulls, bones, and teardrops made from the dough. This bread is typically round, to symbolize the circle of life and death. Sugar skulls serve as both decorations and treats. Some are relatively simple, while others are ornate, edible masterpieces. There are also several traditional drinks consumed on the Day of the Dead. Hot chocolate is one that most North Americans are familiar with. Other beverages include pulque, a sweet drink made from fermented agave sap, and atole, a thick drink made from corn flour spiced with cinnamon, sugar, and vanilla. 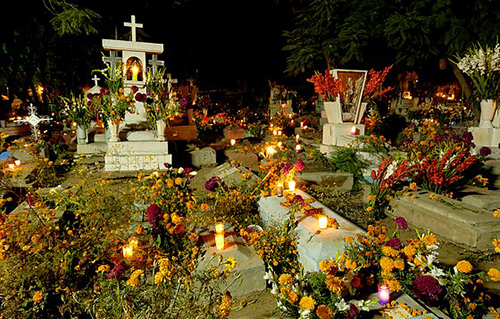 In Mexico, local churches own most graveyards, and it is the responsibility of family members to keep the graves clean and looking nice. On November 2 many Mexican families make a day of visiting their loved one’s graves. They weed around the tombstones and generally clean up the gravesites and then leave offerings of food, marigolds, and incense. It is common for families to have picnics on the graves of their family members and to spend the day sharing memories and telling stories about loved ones who have passed away. Even this tradition is usually not a solemn one, but rather a happy remembrance of loved ones and a reminder to the living that they will someday be similarly remembered. 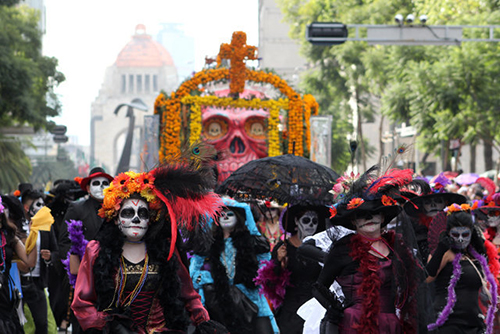 In the United States, many cities and towns have community celebrations for the Day of the Dead. Some of the best known are the Muertos Fest, held in San Antonio, Texas, the Olvera Street Dia de los Muertos celebration in Los Angeles, California, and the Day of the Dead party held annually in San Diego, California’s Old Town. These festivals include many of the same activities and symbols as traditional Mexican celebrations, while also reflecting the unique cultural histories of the cities that host them. Community Day of the Dead celebrations in the United States have a universal appeal similar to St. Patrick’s Day and people from all backgrounds come out and join the party. 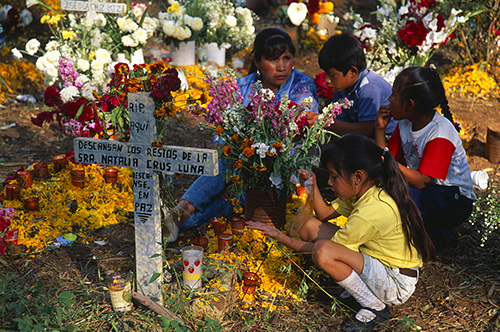 In North America, most of us are used to seeing horror films about scary spirits that terrorize the living. Even though the Day of the Dead occurs at the same time of the year as Halloween, it is good to remember that this holiday isn’t about scary ghosts, but about the spirits of departed family members coming to celebrate their lives with their living loved ones.